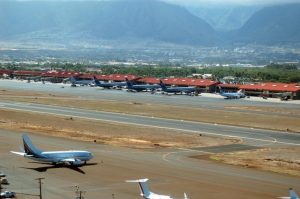 Kahului Airport is located on the northern edge of the land bridge between Haleakala and the West Maui Mountain Range on the island of Maui. The airport occupies 1,391 acres of land and is located three miles east of the town of Kahului.

Kahului is the second busiest airport in the State of Hawaii and the newest in terms of terminal facilities.

Vehicular access to the passenger terminal, commuter/air taxi, cargo, scenic tour operators, general aviation facilities and airport support facilities is via a roadway network that connects to the Haleakala and/or Hana Highways.