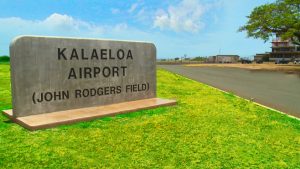 Kalaeloa Airport has been owned and operated by the Oahu District of the State Airports System since July 1, 1999 as a general aviation reliever airport for Daniel K. Inouye International Airport.  It has air traffic control functions from 0600 to 2200 daily but is available as an alternate 24/7/365 and has full daily fire fighting capability.

Users of the airport are the U.S. Coast Guard, Hawaii Community College Flight Program, Hawaii National Guard and the general aviation community.  Major touch and go training occurs at JRF. In 2007 there were 123,184 air operations.

Kalaeloa Airport is a major state asset because it provides a launch site for Coast Guard Search and Rescue operations, a training base for general aviation, an emergency response platform, alternate landing site for airlines and the military, and extension of the capacity of HNL.  The runways date from 1942 and will continue to serve aviation for many more decades.

Four of the buildings on Kalaeloa Airport are eligible for the National Register of Historic Places because of their distinctive architecture.  These are the Air Traffic Control Tower (Building 4), Hangars 110 and 111; and the maintenance building (115) which was originally a torpedo assembly and maintenance facility.