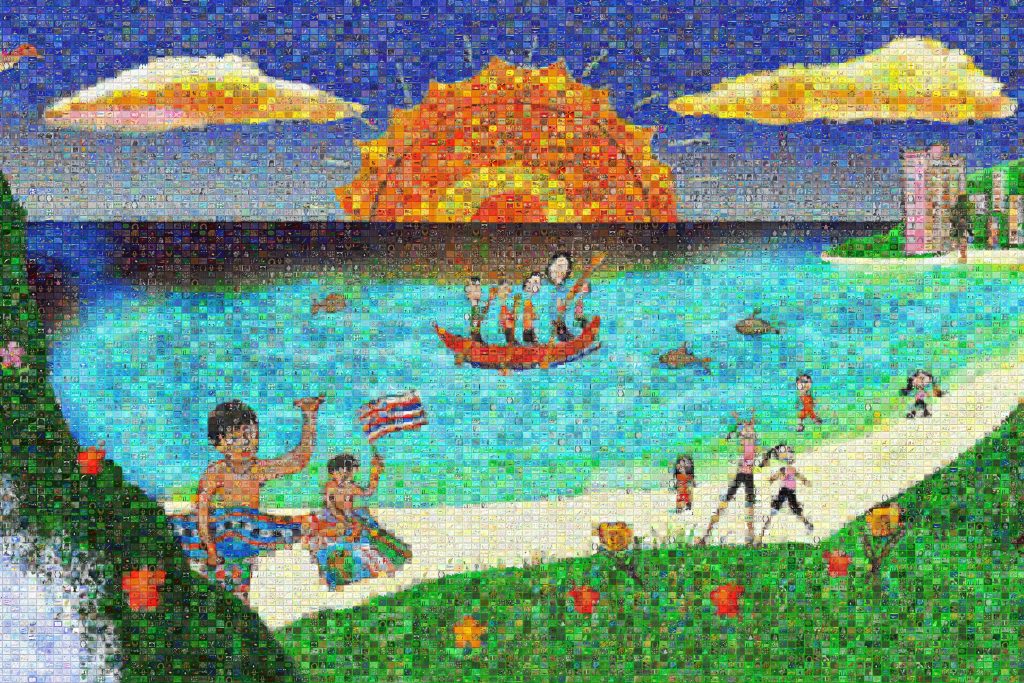 As part of the commemoration of the 50th anniversary of Hawai‘i’s statehood (1959), a giant mosaic mural featuring artwork by students nationwide is located at the Daniel K. Inouye International Airport.  Made up of over 8,000 unique images, the mural was created as a lasting tribute to our state.

To create the mosaic mural, the 50th Anniversary of Hawai‘i Statehood Commission partnered with Project S.N.A.P., a national organization dedicated to helping students develop the skills and insights necessary to become socially responsible leaders and engaged citizens, to create a commemorative mural honoring Hawai‘i’s past, present and future.

The mosaic mural is made up of artwork by public, private and charter school students in grades K-12 from Hawai‘i and across the nation depicting what the 50th state means to them.  Students were requested to create artwork focusing on the theme: “Commemorating 50 Years of Statehood: What I Love About Hawai‘i.”  Components of several individual drawings and paintings were utilized to create the larger mural image.  The individual creations are visible as separate images within the body of the larger mosaic.  The mural is mounted in Terminal 2, Concourse E, Diamond Head breezeway.

The mural depicts colorful scenes from across the state.  Green mountains with a waterfall, Hawaiian flora and fauna, people playing music and dancing hula, families at the beach, a city skyline, and a brilliant sunset come together in the joyful composition representing what students cherish about Hawai‘i.

“Education has been a central component of the goals and projects to commemorate the 50th anniversary of statehood,” said Kippen de Alba Chu, chair of the Hawai‘i 50th Anniversary of Statehood Commission.  “By including students from Hawai‘i and throughout the other 49 states, the Commission is able to further the understanding about what is so special about Hawai‘i.”

Project S.N.A.P. was created to give students and their families the opportunity to become 21st Century Green Leaders and speak out on issues that matter to them using art with a message.  S.N.A.P. stands for Share, Nurture, Act and Preserve.