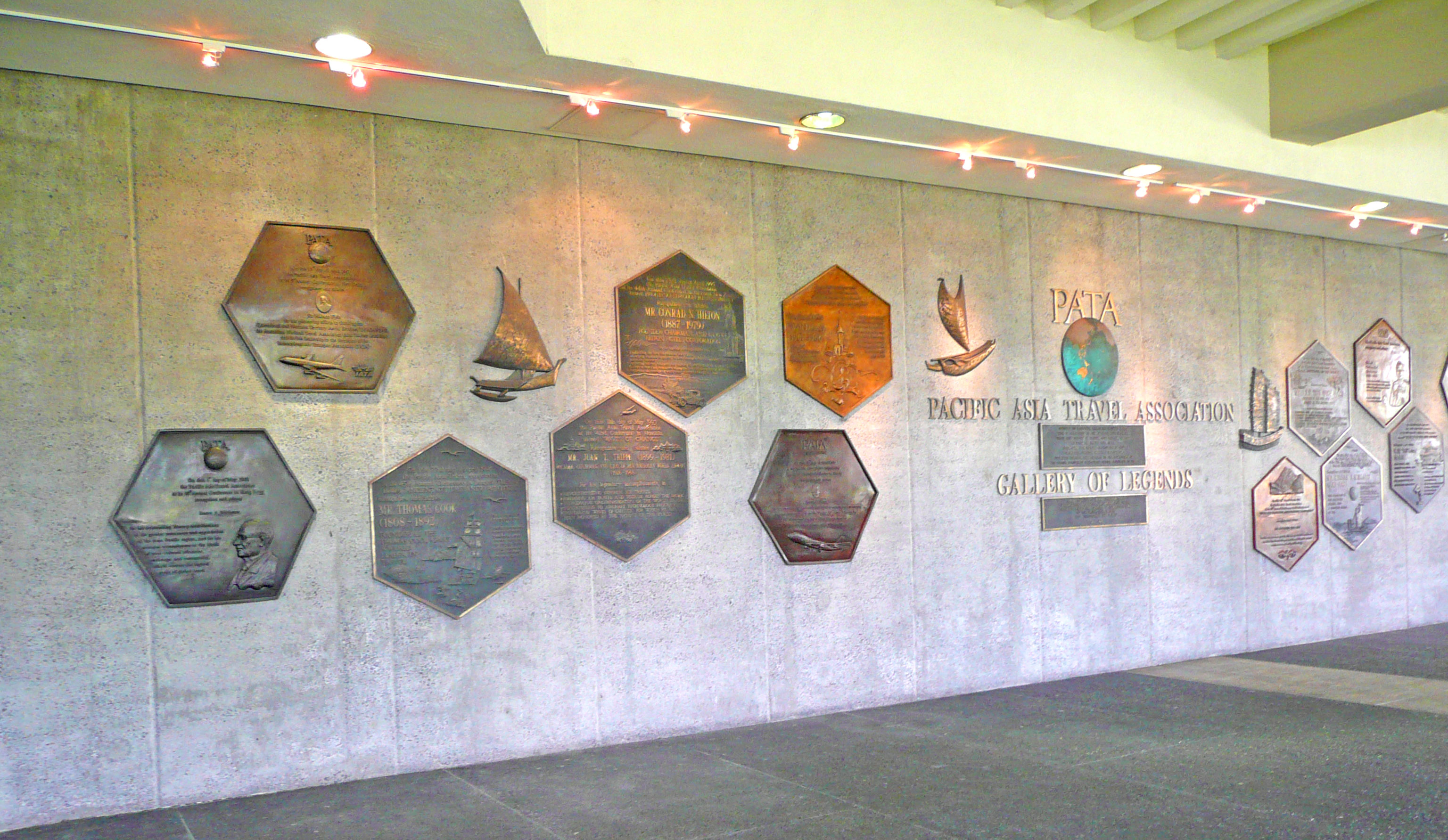 Founded in Honolulu on January 15, 1952, the Pacific Asia Travel Association (PATA) is committed to the development, growth, value and quality of travel and tourism to and within the Pacific Asia area. The more than 2,000 PATA member organizations and 20,000 PATA chapter members worldwide are dedicated to the enhancement of living standards worldwide.  Annually they honor in the Gallery of Legends those individuals whose contributions exemplify excellence, leadership and vision, and who have enhanced the quality of community life in the Pacific Asia region and throughout the world.  The Gallery of Legends in located on the north side of the open air walkway to the E Gates.

PATA has recognized the following in the Gallery of Legends:

Founder of the Thomas Cook Group, a world leader in travel, was recognized for his accomplishment in creating the modern concept of travel, developing group pleasure travel to Asia and the Pacific, and building respect for ancient cultures throughout the globe.

For his pioneering efforts in founding the Queensland and Northern Territory Aerial Services Ltd. (Qantas), the Australia National Travel Association (now Tourism Australia) and for his leadership in the formation of the Inteernational Air Transport Association (IATA).

For his adventurous spirit in the conquest of Mount Everest and his devotion to the preservation of Nepal’s natural environment and cultural heritage.

Founder, Chairman and CEO, Hilton Hotels Association, for establishing the first international hotel chain, developing standards of quality in hotel management and operations for the entire hospitality industry, supporting industry education and training, and furthering the concept of world peace through international trade and travel.

For his outstanding literary contributions to the area of awareness and appreciation of the Asia Pacific region and for his personal commitment to the ideals of cultural tolerance, exchange and community, which remain the highest goals of global travel.

Vice President of Pan American Airways, & a founding father of PATA, for developing travel to the South Pacific, leadership in protection of the region’s environment and cultural heritage, and his groundbreaking efforts in tourism training and education.

For his high caliber statesmanship and outstanding contributions to PATA and to the development of the travel and tourism industry in the Pacific.

For his outstanding leadership and lifetime contribution to aviation and for his design work on the Boeing 747 the “Jumbo Jet” which brought more affordable air travel to the wider international community.

Chairman of Tata Sons, 1938-1991; Founder of Tata Airlines (1932), for pioneering civil air transport in India, expanding the Indian industrial base, initiating partnerships between labor and management, and symbolizing the spirit of adventure and daring to the citizens of the world.

Founder, Chairman and CEO of Pan American World Airways (1926-1968), was honored for revolutionizing common air travel, initiating air travel and tourism across the Pacific, introducing circumnavigation of the world by air, contributing to aircraft technology programs, and pioneering waves of change for which he has been honored by the nations of the world.

For his pioneering role in bringing culturally and environmentally sensitive resort hotels to Pacific nations, and for his dedication and contribution to travel and tourism in Asia Pacific.